← Museums and Work/Life Balance in a Digital World…plus a P.S. for Paris in Honor of Elaine Heumann Gurian
Intercom 2015: What We Heard; What We Talked About → 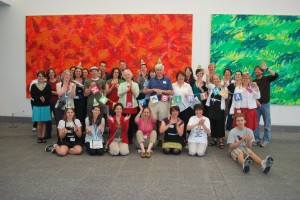 This week I was lucky enough to have a long phone conversation with Elaine Heumann Gurian. She describes herself as the Bernie Sanders of the museum world, meaning she’s been on the left of things for 45 years and never altered her course. If you’re not familiar with her work, you may want to visit her website.

Heumann Gurian is an advocate of the museum as the family dinner table–a place where we all have a seat, where all our voices are heard whether we’re sitting in the high chair, just home from college or the family’s eldest member. She doesn’t have much time for sites that speak as if they’re the oracle of all knowledge and then wonder why no one listens. Actually, that’s not true. She has a lot of time for them if they’re interested in experimenting and changing the way they do things.

Heumann Gurian’s contention that museums need to respect their audiences extends “backstage” to the world of museum personnel as well. She believes that if your staff is happy your audience will forgive you almost anything. Think about that. Think about the damage disgruntled, cranky staff can do. Ponder a leader’s responsibility to create an atmosphere of happiness. What goes into that equation? You’re not their shrink and you are not responsible for the fact that they had a bad break-up, their cat died or insurance failed to pay for their expensive periodontal work. You are responsible for creating an atmosphere of authenticity, transparency and creativity where staff can do the best work possible. And part of being transparent is acknowledging that family–in the largest sense–whether it’s a sick toddler, a partner who had out-patient surgery or an aging parent affects staff engagement. Creating an atmosphere where staff don’t feel judged about taking care and taking time reaps its own rewards.

Here at Leadership Matters we struggle–especially in the wake of our work on gender–with museums who are outwardly all about equity. Their press offices never issue pictures without the appropriate racial, ethnic and gender balance; their exhibits are carefully calibrated to reflect community. Yet backstage, life is often different. I’ll leave you with a quote from Heumann Gurian:

The reality is that most museum staffs don’t really believe in egalitarianism either.  One finds, in the endless meeting culture, that once a decision seems to be made in the meeting, staff corner each other in hallways (often directly after the meeting is adjourned) to relitigate the issue based on the power and persistence of the individuals involved in order to reach decisions, or overturn previously made ones.

Think about it, and work to make change happen.

Image above:  Staff of the Eric Carle Museum gather in front of Carle’s murals in celebration of the artist’s birthday.

A blog on what we get wrong, and right, about work and life