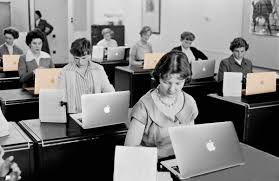 It’s almost December and time for Leadership Matters to turn its lens on gender to highlight work we’re doing for Women|Museums scheduled for publication by Left Coast Press in 2016. First, an apology to our international readers: because data is so difficult to extract, our work is primarily focused on the U.S., and what little data there is in this blog post is U.S.-based.  Second, the American museum world is not aggressive regarding workplace data collection, and that is never more obvious then when you try to trace personnel trends. Last, although perhaps this is true internationally as well, the world of American museum work is more honey comb than melting pot. Children’s museums have a different culture than living collections, and living collections than art, and so on, making it dangerous to compare apples to tangerines.

That said, what comes to mind when we say the words “female-dominated profession.” Nursing? Elementary School teachers? Social Workers? If those were your first thoughts, you are correct. Those are the top three female-dominated careers in the country. And what does that mean beyond the fact that if your child is in elementary school chances are good that both his teacher and the school nurse will be women? It matters because they are known as the “pink collar” professions. There are roughly 20 of them dominated by women.

Then there are the museum world’s sister professions–libraries and archives–where women have gained ground since 1950. Today 61 percent of all library directors are women, and women now outnumber men 3-1 in the archives field. But wait: Leadership Matters isn’t a fan of female dominated professions. Instead we’re raising the flag because if you believe the Bureau of Labor Statistics figures for our own field, it is now about 45-percent women. We think we might be at the tipping point. And with more women finishing college than men, and more museum studies programs dominated by women, it is likely that in another decade or two, museums will join libraries and archives as pink collar professions.

As a field, we express concern about our lack of diversity. While this probably shouldn’t be a surprise when museums are by and large traditional, hierarchical organizations, where a graduate degree is the professional entrance fee, where the median salary is $45,000, and where the vast majority of jobs are in medium to small history museums outside an urban orbit, it is concerning. And Leadership Matters supports these concerns. We believe museum staffs should reflect their communities. So if you’re in a small New England city with a large immigrant population, perhaps your staff or volunteers should have faces that resemble the folks you serve. But that is a different question than gender which is rarely asked or talked about.

Are we comfortable becoming a female-dominated profession? Leadership Matters isn’t, at least not without a conversation or two, and we wish it were something AAM and AASLH would talk about. Why do we care? Economists and workplace psychologists warn that gender balanced workplaces are more efficient, more inventive, more productive. Second, research shows that men in female-dominated professions are paid more (yes, that again) and promoted more quickly, leaving their female colleagues behind. Last, female-dominated professions carry a social stigma. In plain English that sometimes means women are paid less because they are in women’s jobs, and women’s jobs are paid less because they are done by women. And to make matters worse, as late as 2011 a study done by Elsesser and Lever, shows us that  54-percent of their respondents said they didn’t care about the gender of their boss, yet 31-percent still preferred working for a man. What does this type of deep-seated behavior mean for our field?

What should the museum field do? In a word, talk. Let’s acknowledge what is happening and make changes to create a gender-balanced work force that reflects the many communities served. Let us know your thoughts.